Is Ruby on Rails Dead?

The Ruby on Rails developers you need!

The “Ruby on Rails is dead” rumor has been around for far too long. Let’s clarify things once and for all.

Ruby on Rails has been around for quite some time since its initial release in 2004 and wide release in 2005. In the fast-moving world of tech maturing is often stigmatized and synonymous with the given technology slow demise into oblivion. But is that really so? Is Ruby on Rails dead after 17 years? The TL;DR answer to this question is no (as stated by the website isrubydead.com). Ruby on Rails may not be the next big thing in 2021, but it’s still very much alive and a stable option for your web app development.

Let’s untangle the story about why Ruby on Rails was presumed dead far too quickly.

Ruby on Rails is dying - debunking the myth

Not the IT Girl of the hour anymore

Convention over configuration in Rails reduced the need for heavy configuration during the web app’s setup, simultaneously speeding up the development process and “making faster progress in areas that really matter”. Rails' main focus was to "make programmers as productive as possible, and as happy as possible and remove boilerplate" (boilerplate code is usually sections of code that are repeated in multiple places with little to no variation that carry no business function, but are necessary for the app’s functioning).

Rails gained immense popularity also thanks to the built-in automated testing and the scaffolding feature (it allows you to create minimum simplest code keeping the application up in the earlier stages of development to see how all components work together).

Compared to its competitors like PHP or Python, Rails was a winner and in many ways it shaped the tech we know today. Many big names were using it - most notably Twitter. Rails is also reflected in modern frameworks like Node.js. But after the initial buzz, the world found another next big thing in tech, and the Rails popularity, quite naturally, dropped. It may no longer be hyped and on everyone’s lips like some of the newer and more fresh frameworks, but it’s a mature and well-established technology with a reputation for its stability and fast development process.

The buzz around newer and more fresh frameworks and technologies may make it seem like Ruby on Rails is no longer present in the debate. But this is just the natural life cycle of news and just that. The hard data and statistics available can confirm that Ruby on Rails is still a very relevant framework and one of the most loved ones with 49.3% of developers wanting to continue to develop with it (according to Stack Overflow Developer Survey 2020).

The trend statistics on builtwith.com show no tangible decline in the number of Ruby on Rails operating apps around the web. 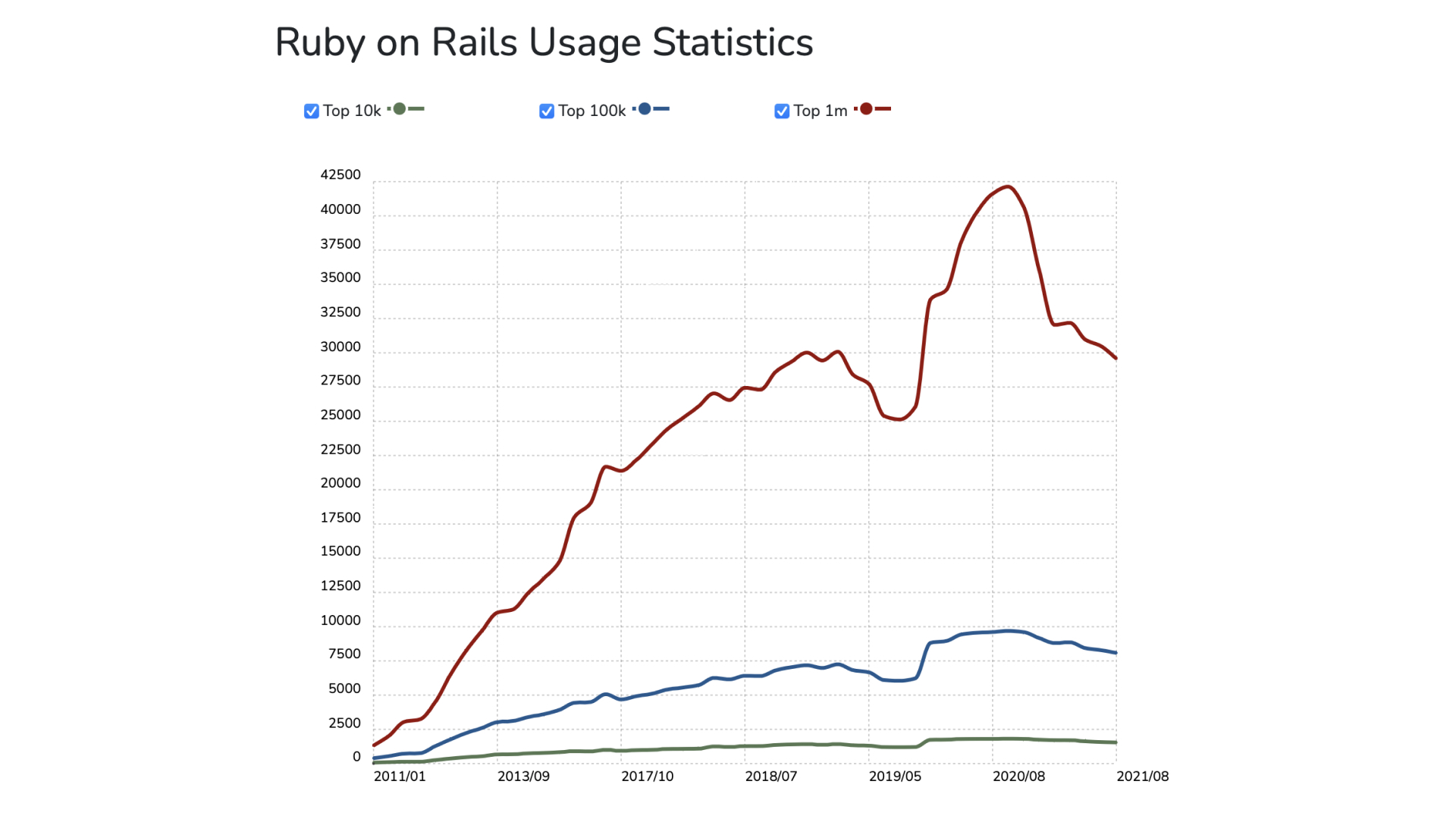 Ruby on Rails powered websites according to builtwith.com

If we had to mention one event that started questioning Ruby on Rails’s prime time it would be Twitter's decision to move off Rails and choose Scala, because of Rails’ supposedly poor scaling. It’s true that Ruby on Rails operates on fixed rules and default code patterns, and it’s all good, up to a point when you decide you need to build more unconventional architecture to add to your already existing app.

That being said, Twitter gave up Rails only after becoming a global social media operation needing to satisfy users around the globe, and do so at all times. Rails helped them become what they are today, and you can hardly call that a mistake in choosing the technology.

Until you reach Twitter's point, Rails’ scalability is much more reliant on your developers’ work. The sole choice of technology won’t make or break your business, but the quality of code, the architecture, and the processes of how it’s created most definitely will.

Ruby is an interpreted programming language. It’s first translated to machine code and can be executed after as opposed to compiled languages like C++ which can be executed immediately as you run it. This is where the speed and performance argument mostly comes from, but again, it’s all theory.

In practice, Rails’ speed, similarly to its flexibility, is very much dependent on the skills of your developers. The project kickoff in Rails is crucial - this is the time when you set all database migrations, routing, and basic architecture. If done incorrectly it sure can affect your app’s performance in the long run, but again, it’s not so much the choice of technology as it is the choice of your developers and their expertise.

So why Ruby on Rails is not dead

Rails’ might not be as hot as a couple of years ago, but it matured to be a stable framework having answers for many businesses’ problems and with community libraries full of solutions for the not-so-obvious dilemmas. This is what makes Rails an obvious choice for MVPs, generic apps, and fast prototyping.

Being an open-source framework, Ruby on Rails’ community is truly what keeps it alive. A quick look through Github, StackOverflow, or Reddit is enough to see that Rails is alive and well. The community takes care of the code base’s constant improvement and shares various ways on how to incorporate various functionalities into your project.

Rails’ open-source libraries are called gems, and they are one of the main reasons why writing in Rails is much quicker than it may be in some fresh languages with smaller communities around it. Gems allow developers to add functionalities without actually writing code from scratch, which in many cases can speed up the development process significantly. There’s no need to reinvent the wheel, if you need a specific feature, most likely there’s a gem for that.

The Twitter story might not have been the best PR-wise for Rails, but there are still many big guys actively using and scaling their apps with Ruby on Rails. The main example would be GitHub. It was launched 13 years ago in 2008, and as of 2020, it had over 40 M users and more than 190 M repositories. It is the largest code host as of April 2020 and it uses Rails as their main backend and frontend technology. The same goes for Shopify, a global e-commerce platform powering more than 1.7M businesses worldwide, and Airbnb, where over 150 M users booked over 800 M of stays in 2020 alone. As shared by Airbnb themselves, every second around 6 guests check into an Airbnb listing. Big names using Rails in their development, and not fleeing the ship is a pretty straightforward argument that the technology is not only not dead, but quite the opposite.

The future of Ruby on Rails

The TL;DR conclusion? Ruby on Rails is far from being dead. It may not be the next big thing for 2022, but it’s a stable option for your web development. Thanks to its modular approach to code and an extensive library of gems available it’s a quick and cost-effective solution for MVP and app prototyping. For most problems, Rails’ offers ready-to-develop components with well-written documentation.

Ruby on Rails is a scalable framework, but as usual - there’s a catch. With Rails, the quality of work in the project’s kickoff is crucial for the later stages of the development process. Inexperienced Rails developers’ mistakes might cost you a lot in terms of app speed and performance in the future. But all in all, Rails’ maturity means stable and fast development and maintenance, allowing you to focus more on the business logic behind the app rather than the technological hassle on “how to make it work in Rails, and with no bugs”.

Self-managing Teams: Why, What, and How We Do It at EL Passion

How to Develop a Telehealth Platform?