How to identify potentially independent subsystems inside an application? How to create internal boundaries between them? How to split one huge, coupled pile of code into smaller separate pieces? And how to avoid increasing the complexity during the process?

Here are some hopefully useful tips.

Calendar apps, like Google Calendar or iCal allow users to create events and subsequently invite people to these events. Such features are composed of a few smaller operations which can be performed by a system on the backend side, like creating a one-time event, a recurring event, sending an invitation via email or text, inviting an existing user, and so on. These are examples of what I will be referring to as commands, although words like “operations”, “tasks” or“actions” would also fit.

The diagram below illustrates how commands can be combined into one bigger feature.

Diag 1. Submitting a form triggers a whole cascade of commands, starting with CreateEvent. When it’s done, three others are being executed in parallel, including InviteExistingUsers, which triggers yet three other ones.

Two things ought to be noticed here.

Firstly, commands can be called by a user (through UI), but can be also called by other commands, from within the system. For example, SendInvitationsViaEmail can be called by CreateEvent, like in the Diag 1. It can also be called by entering an email and clicking “Send invitation” button on the event page.

Secondly, each command can be running on a different service. A small Node.js worker can be responsible for sending texts, Java application can create records in the database whereas images may be processed by AWS Lambda or Google Cloud Functions.

“Production ready” can mean a lot of things. In this article, I would like to focus on one key aspect of this quality, which is being ready to be used by other persons.

Production ready commands are ready to be used by external systems over which we have neither control nor influence.

There are different levels of such readiness. There are commands used only by a developer who implemented them. Usually, after some time, other team members start to use them. Another example would be people from a company we cooperate with, who call our commands via Web API. In most cases, adjustments and explanations are still available at that level. And then there are people we know nothing about, where the only way of communication is through documentation. Their systems simply call our own.

Of course, a command doesn’t need to be actually exposed to the external world in order to be considered production ready. But if it’s an important one, it should be designed with such readiness in mind. Important things tend to be used by more than one person.

This “social” aspect, i.e. being ready to be used by others, indicates certain patterns when it comes to design and implementation. A few of them are listed below. Although details can vary, a general direction is rather common.

Now, when we know what we are aiming for, we can think about how to achieve it. Here are some rules to follow.

1. Input should be a key-value data structure (hash map), where values are primitive data types.

As we can see, it’s hard to underestimate the importance of this rule.

2. Output also should be a key-value data structure (hash map), where values are primitive data types.

We’ll probably end up adding an additional layer of abstraction anyway, but it will help us deal with errors, parallelism, and so on:

3. Authorization should be part of a command.

It helps 3. Most actions in a system require authorization. We need to know who the actor is and whether this actor has proper access rights.

At the same time, we also want our commands to be able to run in the background easily (see 3), so we can’t tell exactly when an action is taking place. Therefore, the authorization step cannot be separated from the command. It prevents scenarios like creating a resource by a user who has already been deleted.

It helps 2. “Microserviced” commands are usually called from more than one place, for example through an internal API, through public API and from the system itself. When an authorization step is outside of such command (microservice), i.e. if it can be bypassed, then each caller has to perform this step on its own, which is very error-prone.

It supports 1 and 6 because it generally helps to call a command from whatever place without hesitation, like a parent command in a commands tree (6) or an API request (1) sent from the outside world.

A simple implementation of the above includes

4. Input validation and parsing should be part of a command.

As mentioned, an input can come from multiple places: an API request, a submitted form, another command, some forgotten background job, etc. Sometimes the user’s age will come as "21", sometimes as 21, sometimes a request body is { "user_id": 234 }, sometimes it’s “💀💀💀”. Callers shouldn’t care about what they’re forwarding to a command.

When it comes to commands performed asynchronously, one thing is worth mentioning, i.e. when the input is obviously invalid or the authorization step has failed, it usually makes more sense to immediately return an error, like 422 or 401, rather than actually start background processing.

Similar to the authorization requirement mentioned above, it helps 1, 2, 3, and 6, since it helps to call a command from anywhere.

Making a command idempotent (see 5) can be very easy or very difficult, since it depends entirely on what kind of operation the command performs.

PublishEvent may only need handling errors like “this event is already published”, but creating an account in a third-party service, where several API calls are required, can be more challenging.

A good starting point for ensuring idempotence is writing a test case for calling a command with the same arguments more than once.

How to deal with complexity in large software - summary

Commands designed with these rules in mind are easily accessible and composable. They are independent pieces of code. They can be called from everywhere and combined together into advanced business features. Since this approach takes a lot from well known functional programming concepts, I like to call them functional commands.

Below you can find the flowchart summarizing ideas presented in this article.

I hope you’ll find this useful! Thanks for reading! 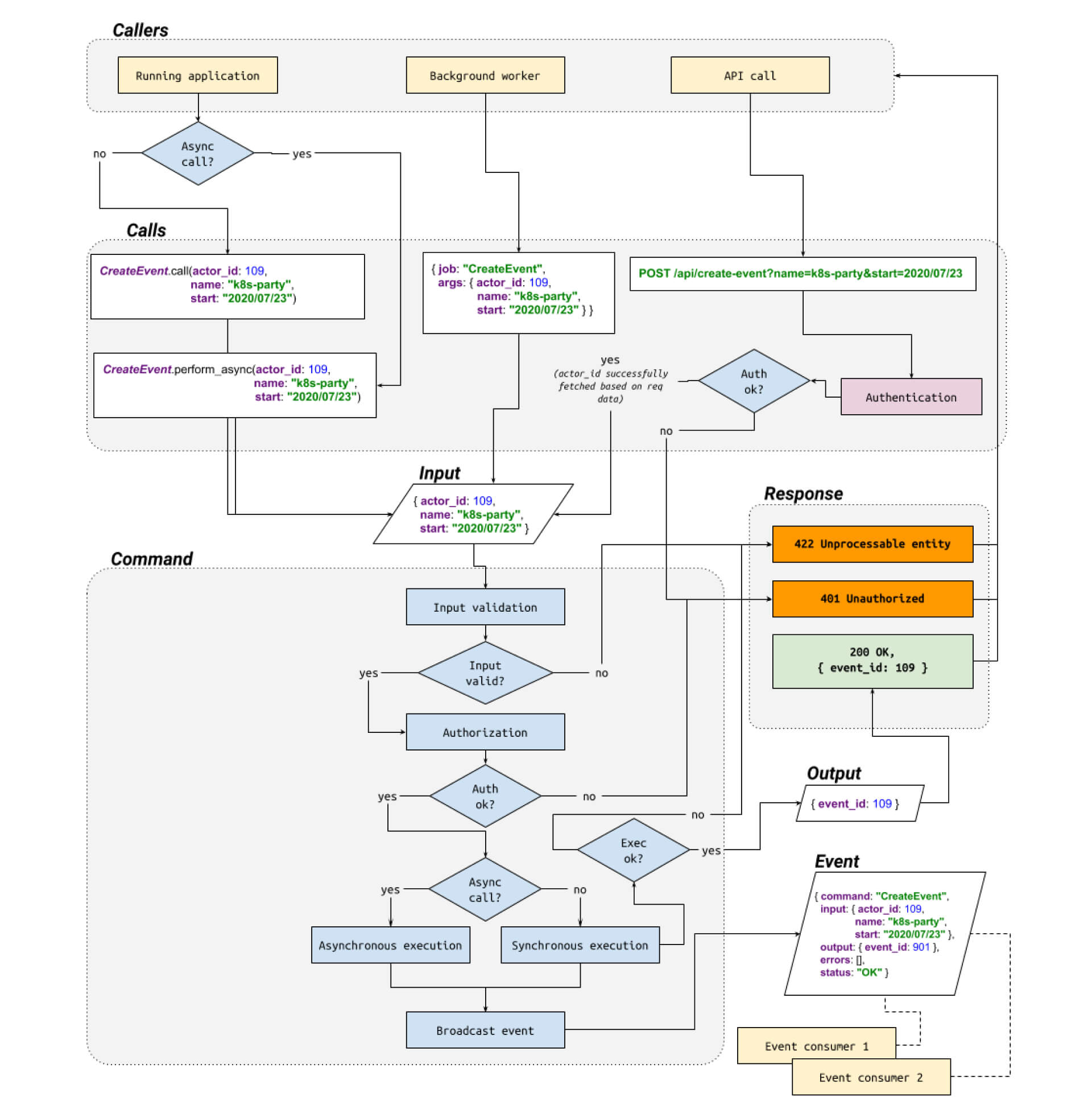